A sucker for a good thing 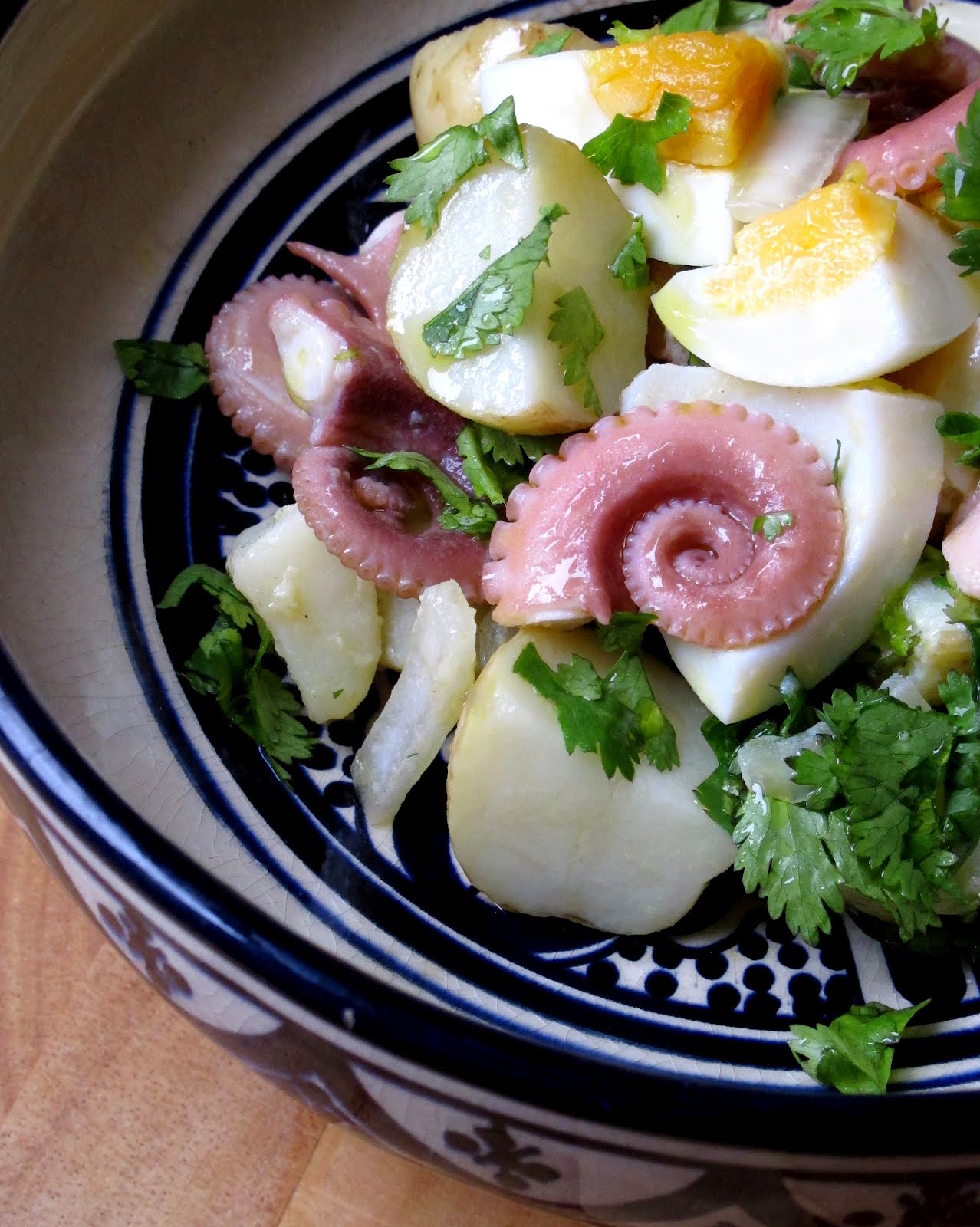 Until recently I was an octopus novice. Eaten once or twice yes, but never attempted at home. But in Portugal they are quite obsessed with it, and rightly so. I was converted.
Octopus has a reputation for being a difficult beast - hellishly tough if overcooked - and huge. Not something to cook on a whim. Poor things. Now I feel bad for presuming, having discovered how ridiculously easy they are to cook. They'll never have the yielding tenderness of a young squid - too large and muscled for that - but long, slow cooking reduces the flesh to a gelatinous softness that is very pleasing.
The magic trick: it goes against every instinct in me to prefer frozen to fresh, but my Portuguese cook/mentor swears that previously frozen octopuses are more tender, and after some testing I must agree. Most octopus in the UK will be frozen anyway, but if you happen upon a fresh one, freeze it overnight before defrosting thoroughly the next day for cooking. Then simply allow the octopus to very, very gently stew in it's own juices, add oil, vinegar and salt, and enjoy those pretty pink tentacles.
PORTUGUESE OCTOPUS SALAD
Serves 4
2 small octopuses (about 1200g combined weight) which have been frozen then defrosted
500g baby new potatoes
4 eggs
large bunch of fresh coriander (50g)
1 onion
1/2 cup (100ml) of extra virgin olive oil
4 tbsp cider vinegar
salt and pepper
1) If the octopus hasn't already been cleaned: remove the internal organs from the body including the quill bones, then press the beak and the soft fleshy part around it out from the centre of the tentacles, cut out and discard. Wash and dry.
2) To cook, place the octopuses in a large pot and turn on the heat to the lowest setting. Allow to slowly cook in their own juices for about 40 minutes to an hour. When the flesh can be pierced easily at the thickest point (where the legs meet the body), then they are done. Once cooked, allow to cool before cutting into small chunks.
3) While the octopuses are cooking, boil the potatoes till cooked through with a large pinch of salt. Place the eggs in cold water, bring to the boil, and simmer for 5 minutes. This should give an egg that is hard boiled but not dry. Cut both into bit sized pieces, and place in a bowl with the octopus.
4) Chop the onion into thin slices, add to the mixture, then chop the coriander and add that too. Whisk the oil and vinegar together in a bowl, add a large pinch of salt and pepper, and use to dress the salad. Check for seasoning (you may need more vinegar depending on how sharp it is), and serve warm with a hunk of crusty bread to mop up the juices.
Posted by IrvingWashington at 21:11