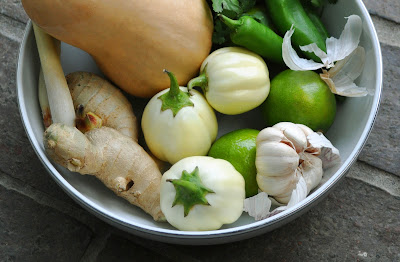 This is super easy to make and really does make a more fragrant, aromatic final dish. The recipe makes enough for four curries, so portion up any remaining paste and freeze it for later use. You can even cook it straight from frozen so it's a useful standby for impromptu dinners.

1) Toast the cumin and coriander seeds in a pan for a couple of minutes, until they release a warm, toasty aroma, then grind to a fine powder.

2) Chop all the remaining ingredients into fine pieces, then blend to a paste with the ground spices in a blender or food processor. If it's too thick to blend, add a spoon of water.
Posted by IrvingWashington at 08:37